William Hamilton, Campi Phlegræi. Observations On The Volcanos Of The Two Sicilies As They have been communicated to the Royal Society of London, 2 Bde, Naples 1776

Campi Phlegraei by the Scottish art collector and volcanologist Sir William Hamilton is one of the best-known eighteenth-century records of Vesuvius and its surroundings. While a British diplomat at the court of the Kingdom of Naples, he conducted studies of Vesuvius and the Phlegraean Fields and reported his observations to the Royal Society in London. For his Campi Phlegraei, he commissioned the artist Pietro Fabris to produce gouache paintings with images of the volcanic landscapes and rocks, which were embedded in the context of the printed correspondence in English and French. Hamilton’s work illustrates, on the one hand, the perception of the volcano as a sublime spectacle of nature and, on the other hand, the rise of geology as a science with detailed illustrations of various rocks. In fact, the images had a great scientific influence in the contemporary field of activity. Several plates were stolen from the copy of the Bibliotheca Hertziana as part of a systematic theft in the mid-1990s, which reveals the value of the illustrations as collectors’ items. [HS]

Seven views of Vesuvius with the gradual increase of a little mountain inside the crater from July 8 to October 29, 1767; plate II. 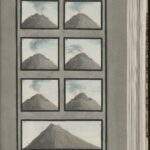 The illustrations are for the most part vedute with the remaining ones being a few detailed geological studies. Only the first two plates differ: the first is a map of the Gulf of Naples; the second combines a sequence of seven views of Vesuvius, in which the process of the volcanic eruption is represented in a rather unspectacular way, without embers and flames. This sequence, which shows the gradual growth of a mountain inside the crater, serves, as did plate III in the 1772 Observations On Mount Vesuvius, Mount Etna, And Other Volcanos (on display in this same section), to illustrate Hamilton’s central thesis, ‘that Mountains are produced by volcanos, and not Volcanos by mountains’. [PH]

The crater of Vesuvius with outflowing lava; plate X. 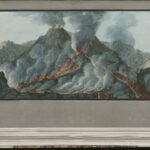 Plate X shows the interior of the crater of Vesuvius taken from a drawing documenting the situation in 1756. It shows the elevations formed by the outflowing lava, which changes the shape of the mountain. The streams of incandescent lava are accompanied by clouds of smoke, but this is not a night view, a detail that makes such an event appear even more dramatic and is often chosen in illustrations. In landscape painting, natural disasters became a pictorial theme in their own right towards the middle of the eighteenth century. Nature became a player in its own right rather than a mere stage for human action. A key painting in this regard is Vesuvius in Eruption, with a view over the Islands in the Bay of Naples by Joseph Wright of Derby in 1774. Hamilton’s commissioned illustrations, on the other hand, are intended to provide a view as faithful to nature as possible. The aim is not to emphasise a play of light and shadow or an atmospheric rendering, but to provide an account of events. The illustrations in his work thus acquire an intrinsic value and contribute to the formation of a visual language in the discourse of the perception of nature. [PH] 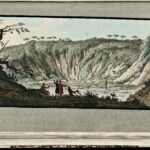 We know little about the artist Pietro Fabris, to whom we owe the illustrations in Hamilton’s work: one hypothesis is that he was born in England around 1735, the son of the Venetian painter Jacopo Fabris and an Englishwoman called Susanna Jeffreys. However, his style and pictorial subjects, such as Neapolitan genre scenes and the eruption of Mount Vesuvius in 1754 and 1760, indicate that he must have come to Naples early. Crucial to his career was his meeting with Lord Hamilton in 1764, who became his most important collector and patron, and who also brought him into contact with other potential buyers. In several vedute, a male figure dressed in red appears on horseback, riding or contemplating the landscape or in conversation with other persons, clearly, this is Hamilton himself. In several cases, as here, he is accompanied by a man in blue, who in one case (in a plate missing in the Hertziana’s copy) is depicted drawing, so this may be the artist himself. [PH] 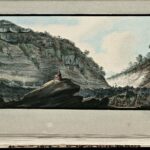 In the illustration of the Fossa Grande, a man dressed in red sits prominently on a stone almost in the middle of the picture. He is drawing the geological formations that can easily be seen on the flanks of the so-called ‘big pit’. Is this the artist, or is the artist here portraying Lord Hamilton, who is studying the layers of volcanic materials analysed in the text? The artist reproduces the bluish layers of lava peeling away from the layers of material of different thicknesses, which enable a chronology of the eruptions to be traced. Geological studies are combined here with the aesthetics of landscape painting: while the rock seems to be in flowing motion thanks to the layers, the solidified lava of the most recent eruption fills the valley like a black river. The vines visible on the right refer to the agricultural exploitation of the land made fertile by the volcanic ash. [PH]

The discovery of the Temple of Isis in Pompei; plate XXXXI. 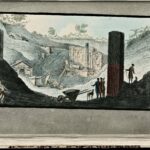 The eruption of Vesuvius in AD 79, documented in detail in Pliny the Younger’s letter, buried the towns of Pompeii, Herculaneum, Stabie and Oplontis, which remained largely intact and forgotten for 1600 years. Systematic excavations began at the beginning of the eighteenth century, and in 1748 the Neapolitan royal house commissioned excavations in Pompeii, the main purpose of which was to recover particular works and valuables. On August 20, 1763, a stone was found with the inscription ‘[…] rei publicae Pompeianorum’, thus identifying the city as Pompeii. It has been possible to visit the area of the excavations since 1763, and the Temple of Isis was one of the first buildings brought to light. The illustration in Hamilton’s work is therefore one of the first to give an idea of the situation at that time, when visitors and workers removing volcanic sediments from the Pompeian remains were to be seen together on the site. [PH] 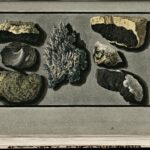 This is one of 25 plates dedicated to the diversity and complexity of Vesuvius’ eruptive material. As the caption explains, various volcanic samples from the crater are depicted here. This is solidified lava, the different colours of which are due to sulphur and salt incrustations. Precise empirical observation is combined here with an aesthetic presentation reminiscent of the display of such pieces in a mineral cabinet. In fact, the publication was mainly aimed at a wealthy and art-loving public, who probably rarely bothered to look for the small numbers to identify the objects with the help of the captions, but rather preferred to appreciate images coloured in gouache. [PH] 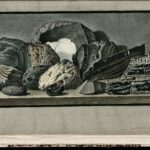 The plate presents a collection of finds from various locations in the Phlegraean Fields, some of which are vitrified. The formation of volcanic glass depends strongly on the viscosity of the lava. Due to the rapid cooling, no regular crystal structures are formed, so the glass has a chaotic structure. The colour – usually dark green to black – varies according to the presence of various impurities and their states of oxidation. Recovered objects are arranged one after the other, so that less emphasis is placed on their individual presentation or recognisability, favouring the aesthetic composition of the whole. Indeed, this attractive presentation has probably contributed to the fact that – as is also the case with the specimen in the Bibliotheca Hertzana – the plates of the work have often been removed to become collector’s items in their own right. [PH]
Link Kubikat Link Mirador
Prev4.14a Hamilton 1774
5.01 Goethe 1830Next