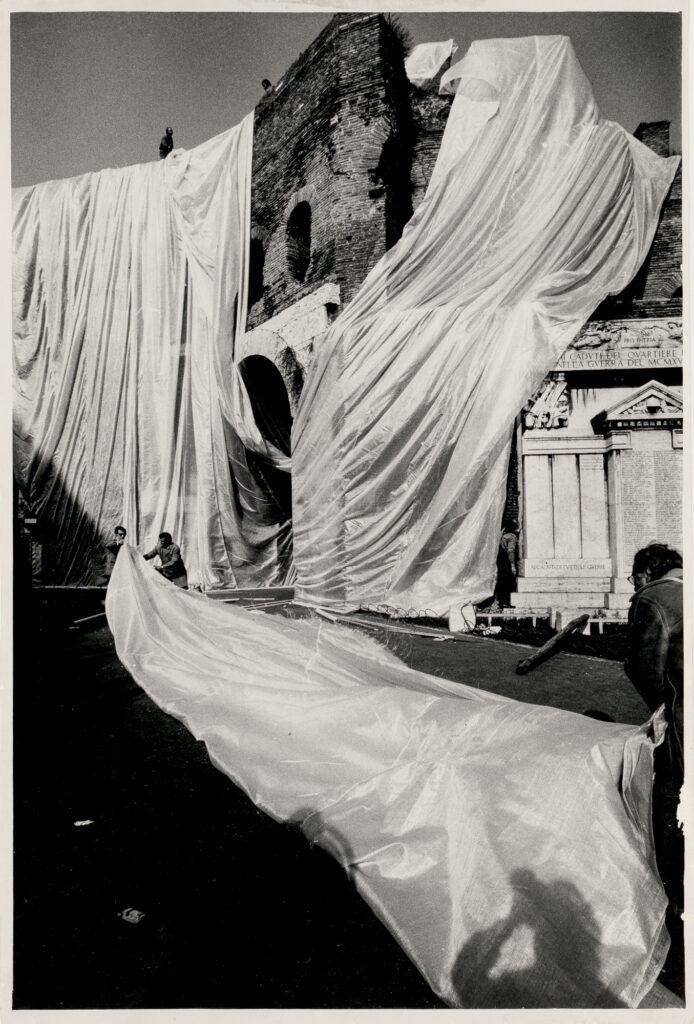 “If anything characterises the relations between art and photography today, it is the unresolved tension introduced between them by the photography of works of art.”
Walter Benjamin, Little History of Photography (1931)

Over the past few years the Incontri Internazionali d’Arte association has been the subject of much attention, with various studies, exhibitions and publications all devoted to its activity. Archival research always plays a key role in work on the group, and one name stands out in the available material: Massimo Piersanti, author of the most evocative photographs of the Roman association’s life since its establishment by Graziella Lonardi Buontempo. His images document the organization’s output from 1970 until Buontempo’s death in 2010. The Incontri space was a fruitful context for not only the artists, curators and critics who experienced it, but also for Piersanti who, as a privileged observer of the changes in contemporary art, was well placed to experiment with and develop his skills as a photographer.
The art scene of the 1960s and 1970s encapsulates the political and social ferment of those decades, its protagonists searching for and elaborating on new expressive idioms capable of challenging established modes and contexts. This experimentation found form in the creation of often ephemeral works of art, the staging of performative actions, the increasing use of alternative spaces for the organization of exhibitions and events, the production of documentation material and the direct involvement of the public in the enjoyment of the works. The photographers who were active during the period are not excluded from this process of experimentation; on the contrary, they become an important reference for artists and practitioners, to whom they delegate the creation of images capable of recording the changes taking place. Photography thus provides art with a lasting image of itself.

Massimo Piersanti established himself as a professional photographer in Rome in the late 1960s, after a long period spent in Naples and abroad. He was self-taught, and became part of the Roman art scene as a result of his natural curiosity, which allowed him to take his first steps in the world of cinema and theatre. From there he started collaborating with important advertising agencies who commissioned him for prestigious photographic campaigns such as those for Alitalia and Valtur. His agency work allowed him not only to travel extensively during those years, but also to have the necessary resources to use avant-garde equipment, both in the studio and outdoors. Above all, though, it guaranteed him the freedom to choose the subjects he wanted to devote his free time to.
So it was that in 1970 he began collaborating with Graziella Lonardi Buontempo and Achille Bonito Oliva. After being introduced to him by the art critic Bruno Corà at the exhibition Vitalità del negativo nell’arte italiana 1960/1970 at Palazzo delle Esposizioni, they gave him the task of documenting the exhibition, which Ugo Mulas had already started photographing. This was his first time approaching artworks as a photographer, but also his first involvement with the contemporary art world. Thanks to this experience he decided to continue following the Incontri’s program. Then in 1971, following the Seventh Paris Biennale, he became their official photographer. From this moment on, his gaze was entrusted with the tasks of representing the association’s identity, portraying the atmospheres it created, and conveying the creative ferment it produced.

The years between 1971 and the organization of the exhibition Contemporanea in 1973 are the most exciting for Piersanti’s photographic production for the Incontri. He took part actively in the experiments being carried out in photography during the period, especially those related to the medium’s growing proximity to and exchange with the visual arts. Piersanti came to codify his own personal response to the aesthetic and artistic changes, sometimes pushing the technology of the time to its limits (there was no time for long exposures, the light was never optimal, the equipment always had to be light) and, above all, reinterpreting his knowledge of traditional photographic genres.
This aspect emerges especially clearly in the performance shots. In these one perceives a mixture of tension and astonishment – probably the result of not receiving instructions or not being informed in advance of what was going to happen – expressed by his adoption of often accidental, rarely-centered cuts. The lack of distinction between what is the scene and what is on stage leads him to include the audience in the photographic field, and therefore to re-establish the space of the action. This approach of remaining close to the event would become Piersanti’s stylistic signature, and one in which – in contrast to traditional theatre photography – his gaze is superimposed on that of the spectator.
A photographer’s positioning in relation to the space and the audience is perhaps best described as a search for the ‘right distance’. This describes not only the ability to read the space, but also the awareness of what must be included in the image in order that what is being recorded can be understood. In the case of Piersanti’s photography, though the photographer is never directly visible, he manages to leave a trace of himself in the arrangement of the people or the context around him, both of which define his presence. An exception to this rule is the photo chosen as the poster for the exhibition at the Bibliotheca Hertziana, in which Piersanti’s shadow, projected onto the canvas of Christo’s work, reveals his physical presence, extending beyond his role as a photographer.
Spatiality thus takes on the value of a narrative device, just as the temporal dimension does. This becomes more apparent in the photographs dedicated to Christo’s work and is best expressed by Piersanti’s inclusion of the surrounding urban landscape. His decision to photograph the work from the terrace of the Hotel Flora, next to Porta Pinciana, is undoubtedly informed by his work on the Alitalia campaigns, in which the search for a privileged point of view was essential for contextualizing the scene. This was Piersanti’s first foray into architectural photography, but his approach remained and is particularly evident in the shots he took for Bruno Zevi’s publication Venti Monumenti Italiani (1984).

When Piersanti moved to Milan in 1977, his documentation of Incontri’s activities became more irregular. They were particularly sporadic from 1989 to 1996, when he moved to Spain and began working with Fundació Espai Poblenou and Fundació Antoni Tàpies. During this time ­– the peak of his career – he decided to devote himself exclusively to the reproduction of works of art and art documentation photography. When he returned to Italy, however, he did not miss the opportunity to follow Incontri’s events, though he now preferred to record more static exhibitions and installations that allowed him to use a large-format view camera, and in which he could have total control over the composition of the image.
Piersanti’s archive is a valuable tool for investigating multiple themes and for highlighting the interdisciplinary nature of his material. It is fundamental not only to retrace the history of the Incontri Internazionali d’Arte, but also to reflect on the relationship between art and photography, the production and fruition of images, and cultural phenomena more generally. Rereading this material today and reconstructing the author’s intentions makes it possible to offer a critical-interpretative discourse that goes beyond purely historiographic or documentary readings. Indeed, Massimo Piersanti’s archive not only draws attention to the work of art and its photographic reproduction, but also raises interesting questions about the very concept of image understood as a “visual text”, as something to be read and interpreted.

Massimo Piersanti (Rome, 1937) trained as a self-taught photographer and began his career as a professional photographer in Rome in 1967. After a brief foray into the world of cinema and theatre he established himself in the field of commercial photography, where he worked on important advertising campaigns, notably for Alitalia and Valtur. His adaptability and technical completeness allowed him to move toward architectural photography, leading eventually to his collaboration with Bruno Zevi on the Comunicare l’Architettura (Communicating Architecture) project. In 1970, thanks to a meeting with Bruno Corà, he got to know Graziella Lonardi Buontempo and Achille Bonito Oliva, for whom he documented the exhibition Vitalità del negativo, picking up on the work that Ugo Mulas had begun. In 1973, with the exhibition Contemporanea, he became the official photographer of the Incontri Internazionali d’Arte. Despite moving to Barcelona from 1989 to 1996 – a period in which he mainly collaborated with Fundació Espai Poblenou and Fundació Antoni Tàpies – he kept up with the activities of the Incontri during his trips to Italy. Since his return to Rome in the late 1990 to this day, he continues to work as a photographer, collaborating on important exhibition projects and documenting the ongoing events of the Roman art scene.

The Exhibition at Palazzo Zuccari

The exhibition is the result of an extensive project that that involved digitizing and cataloging part of the personal archive of the photographer Massimo Piersanti and the Incontri Internazionali d’Arte Archive of the MAXXI, the National Museum of 21st Century Art.
The photographs on display are a selection of the most representative shots of the Roman Association’s intense cultural and exhibitory activity: from 1970 with the Vitalità del Negativo (Vitality of the Negative) exhibition to the last events organized before Lonardi Buontempo’s death in 2010. This idea of the project is to emphasize the importance of personal archives like Piersanti’s in the understanding of the national art scene – especially in this case as his documentation is fundamental to the historical reconstruction of exhibitions and events. His photographs also constitute useful tools for tracing the evolution of the photographic image in Italy, highlighting the unique relationship that arose between photography and the visual arts in the 1970s.
Collaboration between the Bibliotheca Hertziana, Massimo Piersanti, and the MAXXI Museum enabled the digitization and cataloging of photographs, proofs, negatives, and slides, facilitating the access to these images for researchers and professionals, as well as encouraging their further study and analysis.

Guided tour of the exhibition with the artist (registration required):

All photographs and other content on this site are the property of the named authors (copyright holders) and are protected by applicable national and international law. They may not – except within the legal limits of copyright – be reproduced, distributed, published or made available to the public, either in whole or in part. Use without express, prior, written confirmation is not permitted. Also, any publication of a modification of the photographs without prior consent is prohibited. The authors have a legal right to acknowledge their authorship of the work by affixing a copyright notice. Downloads and copies of the contents and photographs on this site are only permitted for private, non-commercial use.